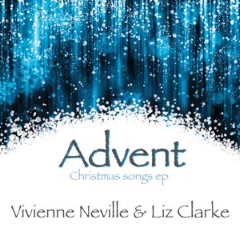 British Celtic singer Vivienne Neville is featured on a four song Christmas EP titled 'Advent' alongside Northern Ireland's Liz Clarke. The two singers provide two songs each for the EP which is available on iTunes and contains four favourite carols including 'In The Bleak Mid Winter' and 'We Three Kings'.

Says Plankton Records, "These recordings are taken from what will be a full blown joint album release next year so get an early taster of what's to come as well as treating yourself to some great Celtic flavoured versions of classic well-loved carols. A gentle, magical and atmospheric musical reminder of the true meaning and message of Christmas."

Vivienne and Liz performed a joint three week US tour in September and are coming to the end of their joint 'Christmas 2010 Live UK Tour' this weekend with concerts in Darlington (11th Dec) and Hartlepool (12th Dec). Liz's second solo album 'The Dream' was released in 2009 and she is currently revisiting and reworking her latest album for release on Plankton in early 2011. Vivienne's latest album, 'Veiled In Mystery', was released in October.