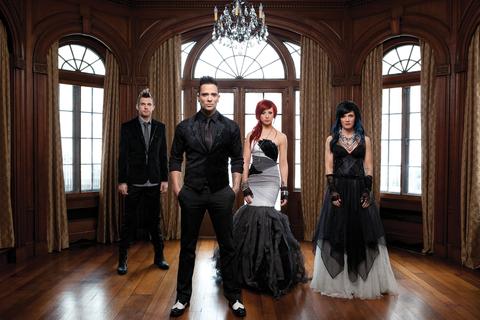 Skillet have announced plans to release their highly anticipated new album 'Rise' on 25th June 2013. The album's lead singles 'Sick Of It' and 'American Noise' will be available at iTunes on 9th and 16th April respectively.

'Rise' follows the band's 2009 blockbuster, 'Awake', which was recently certified platinum for sales in excess of one million copies in the US. It's worth noting that Skillet was the only active rock band to achieve platinum certification in 2012, and were one of only three rock bands (the other two being Mumford & Sons and the Black Keys) to strike platinum in 2012.

The band maintains momentum with 'Rise', a gripping coming-of-age narrative that stands as their first concept album - though lead singer/bassist John Cooper says it wasn't premeditated. The album tells the story of a typical American teen coming into adulthood and trying to figure out who he is in a world riddled with problems both within and outside his control.

"The narrative idea happened after we had 10 or 11 of the songs chosen," he says. "As we recorded them, we started to realize that there was something going on - that the album was really telling a story. Realizing that, I knew we needed to make it as powerful as we could, and say that even though all of those things are happening, there is hope and there is love and there is a God that will be there for you; if you reach out to Him, He will reach back out to you. That message is in all of our records and most of our songs. It certainly is the message of this record."

The result is a wildly ambitious work as heady as it is visceral. Sonically, the disc sees the band expanding their musical palette, integrating natural, acoustic instruments like accordion, mandolin, dulcimer, harp, tympani and bells to their trademark slashing electric guitars, strings, churning synths and pummeling drums.